Having a proclivity towards all things yachting historical, we got kind of excited a couple of weeks ago reflecting on the very old-school extreme fin keel “skimming dish” racing yachts of the 1890’s and early 1900s, while following the epic 2500 miles without a keel voyage of Vendee Globe race fourth place finisher Jean-Pierre Dick.

But somehow it escaped our memory that we’d raced alongside one at Laboe (Kiel) last August during the German Classics. Thankfully, Peggy Bawn and the subject of this post were racing in separate classes.

This was our first glimpse of the spectacular Sonderklasse boat, Tilly XV, designed and built 101 years ago in Hamburg, Germany, by Wilhelm von Hacht. 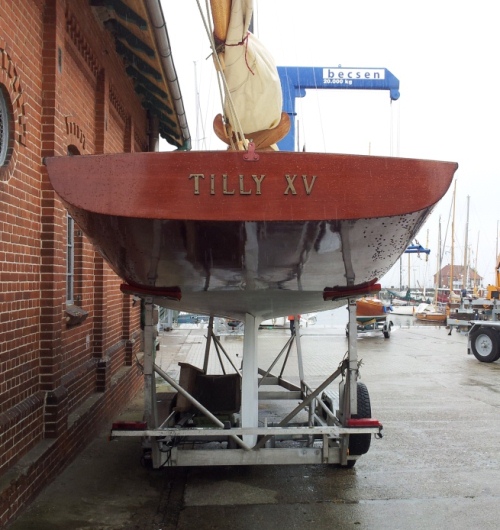 Not a lot of boat in the white bit.

She’d been meticulously restored under the direction of Siggi Rittler. We’re not sure if this was her first modern outing in salty water, but judging by the deserved fussing over her by FKY, we guess it was. Tilly XV’s name joined Peggy Bawn (2006) on the coveted copper kettle prize for Restoration of the Year. 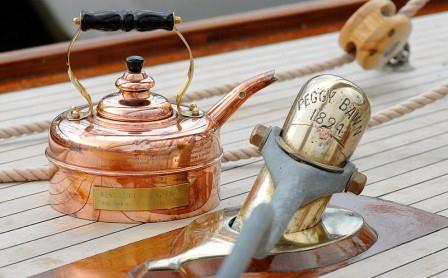 The original, 1900 version of the rule Tilly XV was built to was nice and simple: 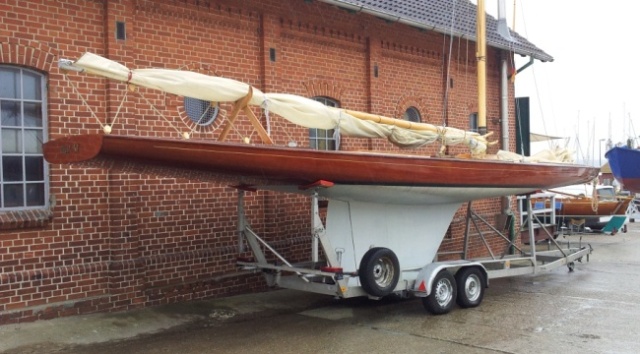 One wonders what present day designers would make of this rule…

Halsey Herreshoff of Bristol, Rhode Island, has been continuing his family’s yacht designing tradition over the years – interspersed with spells as an America’s Cup navigator, and instigating the Herreshoff Marine Museum and America’s Cup Hall of Fame – including, some years ago, developing one of his father, Sidney DeWolf Herreshoff’s designs for a Sonderklasse type boat. 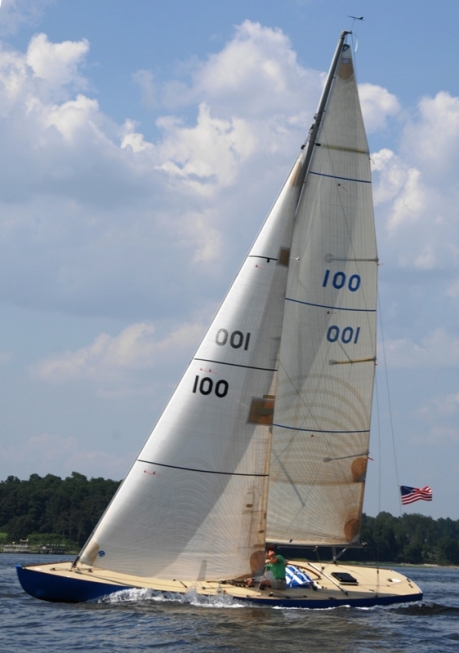 While working at the museum, naval architect Adam Langerman, – now Halsey’s business partner – was involved in digging her out of the famous Bristol sheds and had some great sailing fun with her.

Adam commented on the WoodenBoat forum in 2008:

“… The hull shape actually originates from a Sonder class design by Halsey’s father. Halsey added some freeboard (yes, added!) and updated the appendages, a few times. Eric Geotz built the hull, still in his early days, with double diagonal planking.

“Lately, Streaker had been moth-balled for about 8 yrs. Last spring we tweaked a few things on the deck and in the way of keel structure, awlgripped the hull and deck and bolted the keel back on. Had a blast this summer reaking havoc in the Bristol Wednesday night races and day sailing a lot.

“Below is the latest appendage configuration, I think it’s the third, installed circa 1994. The picture is from when we were installing the keel.” 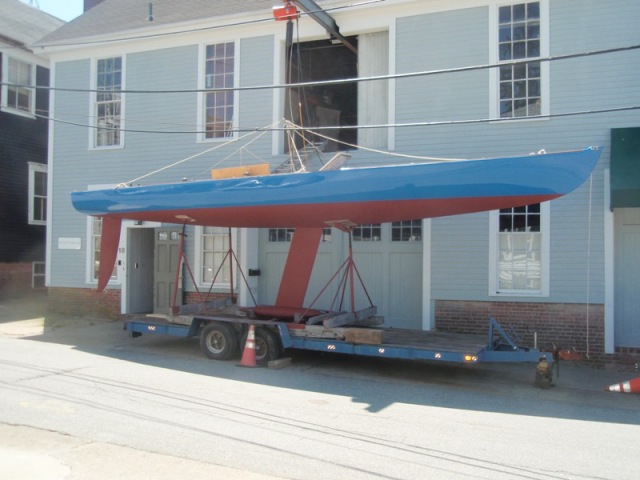 It’s always going to be a lot of fun sailing yachting history, and realising that the designers of the 1890’s had everything worked out rather well, thank you, well before most modern sailors give any credit  for, or even thought to.

But it will inevitably be difficult to resurrect any long defunct design as a successful modern class, even if it had once been active. The success of “sports boats”, such as the Melges 24 and the J-Boats family that give such a thrilling ride and good racing has seen to that.

But professionalism can be the scourge of local sustainability, as recounted in this recent leader article by American sailmaker, Dave Ullman, for Sailing Scuttlebutt.

Why is it that long established classes like Folkboat, Lightning, Water Wags (the world’s first one-design), X-Boat, even Sonderklasse, and countless other local, national and international vintage classes keep going so strongly?

Perhaps it’s that they are sailed by Corinthians.

We trust that the Sonderklasse eventually allowed ladies aboard.

… and how it came about:

Ulf Sommerwerck’s great photos of Tilly XV at the German Classics 2012 are well worth checking out here.

Martin Black’s G.L. Watson – The Art and Science of Yacht Design, isn’t just the story of a great yacht designer. This meticulously researched and built book also examines the evolution of the racing yacht and the specialist practitioner of any discipline.

Hal Sisk’s Dublin Bay – The Cradle of Yacht Racing discusses the origins of organised amateur yacht racing, evolving from a code set in the 1870s by a group of young Dublin based professionals at work, Corinthians at play.

Both books can be purchased online here. 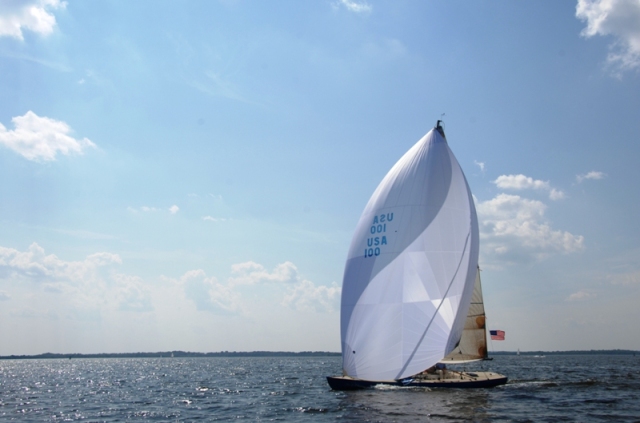