When Tarbert Loch Fyne poet George Campbell Hay (1915-1984) worked 1930s summers aboard the herring skiff Liberator, the local fishing fleet would have been universally motorised, either by conversion or by design.

Perhaps reflecting this transition, in his maritime work a vessel’s power source is either of no concern, or employed to great effect for onomatopoeic rhythm. In Ardlamont, below, we can just as well imagine that he is describing a sailing vessel if that is our desire.

Hay knew the waters of the Clyde’s fishing grounds intimately through all the weather a Scottish summer can muster. Although sheltered from the worst of the North Atlantic’s tantrums by the long peninsula of Kintyre, the Firth’s short chop still drums up lively conditions, especially at its headlands. Often, the fully laden voyage home to Loch Fyne would be against wind and wave.

ARDLAMONT
Rain from windward, sharp and blinding;
sweet to hear my darling tramping
on her way, the seas unminding,
swinging forefoot wounding, stamping.
Steep to windward ridges breaking,
huddled down in flocks before her;
light she throws her head up, shaking
broken seas and spindrift o’er her.

(From Wind on Loch Fyne by George Campbell Hay, Oliver & Boyd, 1948 by kind permission of the Trustees of the W.L. Lorimer Memorial Trust/ Scots Language Centre.)

Ardlamont is an ode to the joy of confidence in a sound vessel that loves doing exactly what it was designed to do – that shows its true character when the going gets tough. It could only be written by someone with fierce affinity to such conditions, and vessels, and locale.

It could be a harsh life then, aboard boats that afforded none of the shelter from the elements enjoyed by today’s fisherman. The rare survivors of the shocking “decommissioning” chainsaw massacres of the 1980s and 1990s – some now authentically preserved as much loved pleasure vessels – offer snug accommodations where once there were fish.

Once upon a time, when my line of work was guiding a lovely old retired Scottish ocean racing yacht for her summer holidays in the Mediterranean, I woke up one morning to this sight for sore eyes at anchor next door in Puerto d’Andraitx, Mallorca: the unmistakably lovely lines of a “Loch Fyne Skiff.” 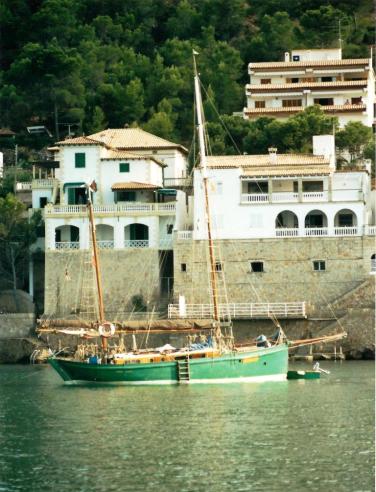 Sireadh was far from the waters of her youth, where she had worked out of Minard on the west shore of Upper Loch Fyne with her ring-netting partner, Clan McNab. They’d been the last of the once numerous Upper Loch Fyne herring fleet.

Her English owners were to introduce this lowlander to a shameful gap in his knowledge of Scottish literature: the work of George Campbell Hay, and his epic but generally unknown poem Seeker, Reaper, first published in 1948.

I learned that Sireadh is gaelic for Seeker, and that Hay started thinking about the poem after she motored past one night.

That I should encounter ocean roving Sireadh and George Campbell Hay so far from home seemed so apt when I eventually caught up with Seeker, Reaper. There can be no doubt about this vessel’s power source. It ends:

She’s a solan, she’s a tramper, she’s a sea-shaker,
she’s a hawk, she’s a hammer, she’s a big-sea-breaker,
she’s a falcon, she’s a kestrel, she’s a wide-night-seeker,
she’s a river, she’s a render, she’s a foam-spray-waker.
She’s a stieve sea-strider, she’s a storm-course-keeper,
she’s a tide-scour-bucker, she’s a quick-light-leaper,
she’s a stem-teerer, keel-teerer, seeker, finder, reaper.
She’s Cast off!    Anchor up!    deid anchor-weary,
she’s a chain-snubber, moorin’-strainer, restless herbour peerie.
She’s a skyline-raiser, skyline-sinker, hulldown horizon-crosser,
She’s foreland, foreland, on and on, a high-heid-tosser.
She’s a glint, she’s a glimmer, she’s a glimpse, she’s a fleeter,
she’s an overhauler, leave-astern, a hale-fleet-beater;
she’s a kyle-coulter, knot-reeler, thrang-speed-spinner,
her mood is moulded on her and the mind that made her’s in her.
She’s a wake-plough, foam-plough, spray-hammer, roarer,
she’s a wind-anvil, crest-batterer, deep-trough-soarer,
she’s a dance-step-turner, she’s a broad-wake-scorer.
She’s a sound-threider, bight-stringer, her hert runs oot afore her.
When the big long seas come on lik walls, cold-white-heided,
she doesna flinch a point for them. Straight her wake is threided.
Though they come from the world’s rim
wi’ a livin’ gale,
she’ll gap and batter through them
and teer her chosen trail.
She’s stieve, thrawn, light, quick,
fast, wild, gay;
she’ll curtain the world wi hammered seas,
she’ll drench the stars wi spray.
They can tower atween her and the sky –
she never felt their awe;
she’ll walk them aa, thon trampin’ boat,
she’ll rise and walk them aa.
She’s a solan’s hert, a solan’s look;
she canna thole a lee.
I’ll coil her ropes and redd her nets,
and ease her through a sea.
She’s a seeker, she’s a hawk, boys.
Thon’s the boat for me.

(From Wind on Loch Fyne by George Campbell Hay, Oliver & Boyd, 1948 by kind permission of the Trustees of the W.L. Lorimer Memorial Trust/ Scots Language Centre.)

This year’s Fife Regatta fleet will enter Loch Fyne for the first time, turning to starboard coming out of the East “Kerry” Kyle of Bute en route from Tighnabruaich to Portavadie Marina.

Will they be “wounding, stamping” their way round Ardlamont? If they are, it’ll be a magnificent sight, and unlike George Campbell Hay’s time, Ceud Mìle Fàilte and a warm shower awaits at Portavadie: an oasis of modern “facilities”, on what the Tarbert fishermen of old would have simply though of as a dangerous lee shore – “The Kerry Shore”. But that’s another of Hay’s fine poems, so we better stop. For now.

Our title refers to the class name for two ground-breaking “Scottish Literature Class” hybrid ferries in build at Ferguson Shipbuilders, Port Glasgow, for Caledonian MacBrayne. Unfortunately no works of local literature were considered for the short leet of three names for public voting for the second ferry, to operate across Loch Fyne from Tarbert to Portavadie. How can George Campbell Hay be so forgotten?

Sireadh is a rare example from her period in Scotland of a working fishing vessel designed by a yacht designer: she was drawn by W.G. McBryde of Glasgow and built in 1923 by Miller of  St. Monance, Fife, which means that she is also a rare example at that time of a west coast “Skiff” type built on the east coast.

On the other hand, in 1887 G.L. Watson probably started the popular trend for sturdy cruising yachts along the lines of the Loch Fyne Skiffs with Nell, design number 134, built by Thomas Orr Jr. of Greenock. She’s still going too, although in for a bit of surgery at the moment. We hope to come back to Nell later.

Shortly after  Sireadh’s build, by the mid 1920s,  W.G. McBryde and Miller of St. Monance were combining to evolve the next generation of “cruiser stern” type that would  become the ubiquitous Scottish fishing vessel into the 1970s – like Shemaron above, launched in 1949 by William Weatherhead of Cockenzie for an Ayrshire owner, by which time boats built on the east coast for work on the west coast were quite a normal thing.

So Sireadh became one of the last of the working Loch Fyne Skiffs to be built. She was sold to Northern Ireland and converted to a yacht just before the Second World War, briefly appeared in the 1946 Supplement to Lloyds Register of Yachts 1939 as “sold and now a fishing vessel” (perhaps reflecting requisitioned war service), and reappeared as the yacht Golden Plover in 1949. We hope she is still going as strong as she was in Mallorca in 1991, as Sireadh again.

Grateful thanks to George Campbell Hay champion, Angus Martin, Campbeltown: poet; aural historian; author of “The Ring-Net Fishermen”, and “Kintyre – The Hidden Past” among others.