When launched last December, she was billed as the first merchant vessel to be built on the Clyde for five years. However, perusal of her motorman’s entertaining blog suggests otherwise. Two small shipbuilding locations with a proud history, including yacht building, have been busy fulfilling a rising demand for inshore workboats: presently for the fish farming industry; perhaps soon for offshore windfarm servicing. 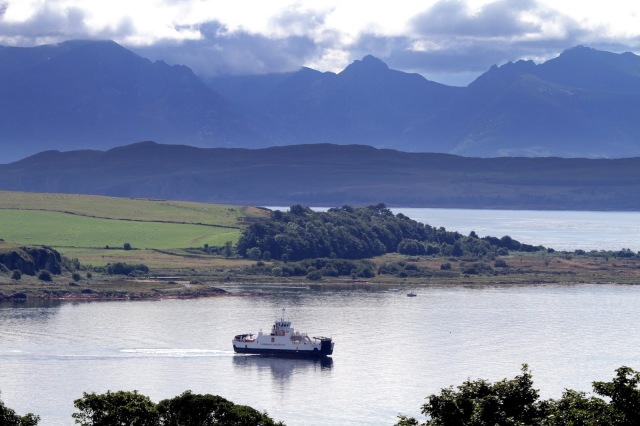 Hallaig is scheduled to enter service in the autumn, with her sistership, Lochinvar, due to take on the Tarbert / Portavadie route across Loch Fyne around the turn of the year.

[UPDATE 13 October 2013: this evening, Hallaig completed her  maiden voyage delivery cruise from Port Glasgow to the Isle of Raasay via Campbeltown and Oban.]

[UPDATE 4 July 2014: Lochinvar entered service on the Tarbert / Portavadie route in time for the 2014 summer season.]

Meanwhile, not very far to the east, a ro-ro car ferry of a different generation, Glenachuilish, last week celebrated 45 years of West Highlands service: firstly across the strong currents of the former Ballachulish crossing, and for the past 31 years on the privately run Glenelg / Skye route across Kylerhea, where spring tides can run at 8 knots. It’s the maritime equivalent of a “cross-wind landing”.

Built in 1969 by Ailsa Shipbuilding at Troon – a yard very well-known to yacht designer G.L. Watson – Glenachuilish is believed to be the last manually operated turntable ferry in service… in Scotland… in the UK… in the world; nobody seems to have the definitive answer. What’s for sure is that she was well “Clydebuilt”, and worth a major birthday party bash at Glenelg Village Hall.

These tales of the most utilitarian of vessels must be miles from the finery of the G.L. Watson story one might think… But from the same drawing boards that witnessed fast and fabulous racing and cruising cutters, schooners and yawls, and sumptuous steam yachts, G.L. Watson would occasionally take on contracts for the design of quite substantial commercial vessels, and we’ve already mentioned his valuable contribution to the development of life saving craft.

Watson’s 1897 design for the John McCallum & Co. West Highlands steamer, Hebrides (design no. 370), repeated an early improvement in “cargo” handling employed on her earlier sister, Hebridean (design no. 43, 1881): large doors within the topsides to allow ease of livestock loading and unloading. One hesitates to imagine what such operations might have been like before that.

Hebrides features strongly in this remarkable c.1928 footage of a voyage to remote and then still populated St. Kilda. She was well named and had a long life.

Did you see the beautiful skylight incorporating seating on the aft deck? Ewen McGee’s drawing reveals that it lit her dining saloon; it must have done so wonderfully. Designers of those days were deft at the projection of natural light – but that’s another story.

[Thanks to bloggers Paul and Isle Ornsay for heads up on the vintage footage.]

Just before posting, we found the evocative and beautifully captured image above of the happy looking Hallaig trying out the Cumbrae Slip / Largs route by the blogger hebrides-hebridesships.  Who are we to argue with that bold sub-title – the images there are stunning – and we wont argue if we are requested to take it down; we failed to find any method of contact, and, as many will testify, we don’t normally run without permission. The Clyde is nothing less than awesome. [Did we just use that word?]