Order of the Thistle

Jaggy bunnets, Erie Basin, New York, September 1887: Thistle’s hands are decked-out in sennet hats, and suitably emblazoned ganseys. Her hirsute skipper, John Barr, is sitting, right. But is his soon to become very famous half-brother, Charlie here? And is your forbear too? Archibald McNicol, the author’s great-grandfather, from St Catherines, Loch Fyne, Argyll, is the white-faced lad sitting 2nd from left on a cushion – the only clean-shaven one. Is that Charlie Barr, and his piercing eyes, sitting to his left? Or is he standing, 4th from left?
(Image by J.S. Johnston, courtesy, Long Island Maritime Museum)

It continues to be the America’s Cup silly season: the void between the last, enthralling episode, and the next; wherever it may be; in whatever boats… And crew nationality has raised its head. Last year’s ‘American’ defender, Oracle Team USA, had only one American among her winning crew: should a clause be introduced to at least limit the number of non-nationals of the challenging or defending club’s country per boat?

As we learn time and again, apart from the technology of the boats participating, there’s nothing really new in the America’s Cup; history has a habit of repeating itself. Prior to 1895 for example, Scandinavian professionals crewed the American Cup defenders.

But there was no nationality issue surrounding the fervently patriotic, all-Scottish 1887 America’s Cup challenge by the Royal Clyde Yacht Club with the G.L. Watson-designed clipper-bowed Thistle: she was built of steel under great secrecy at Partick, Glasgow, by D. & W. Henderson; the head of her all-Scottish owning syndicate, James Bell, would later become Glasgow’s Lord Provost, and gain a knighthood – and her crew were Scots thorough-and-through.

Whatever the make-up of the defender crews, their skippers through to the mid 1890s remained home-grown. But things were soon to change: the growing success up to this time in U.S. waters by Scotland’s leading yacht designers, the friendly rivals William Fife Jr and G.L. Watson, would bring two major America’s Cup characters to the fore for the defence – both Scottish. One of them would become an America’s Cup icon.

Thistle’s racing skipper, John Barr (aged 42), from the Firth of Clyde fishing village  of Gourock (the rail-head didn’t arrive until 1889), and his half-brother Charlie (23) who shipped aboard just for the Cup races, most probably knew by this time where their future as professional yachtsmen lay: they were already intimate with the waters of the other side of the Atlantic Ocean, having delivered and raced Clyde-built yachts there. They liked what they saw and American yachtsmen took to them.

By 1889 John had emigrated, to Marblehead, Massachusetts, then arguably the most prominent of American yachting stations. And Charlie, despite a reported brief return to Scotland, never really left in his mind – finally becoming a U.S. citizen in 1893, thus clearing the way to becoming an America’s Cup defending skipper.* Both enjoyed successful careers thereafter, but Charlie’s was stellar: a story for another day.

The Barrs would become the first subjects for discussion about nationality and the America’s Cup. Maybe even nationality in international sport of any kind?

What of the other, apparently anonymous lads in the wonderful crew photo above, taken in September 1887 when Thistle was in the Erie Basin dry dock, New York, for cleaning and measuring. Who were they? Thankfully, because of the general furore the Thistle challenge generated around Glasgow, we at least know their names.

Thistle, about to anchor (or weighing anchor?) somewhere near New York, 1887, with John Barr prominent at the tiller. The full beauty of Watson’s sheerline is clearly seen in a rare image of her almost at rest.
(Library of Congress)

Unusually in the press reporting of yachting, even now, Thistle’s full crew list for the 1887 season – including the America’s Cup races – was published.

Why not? These were national and local heroes. Had there been any previous sporting event where a Scottish team had travelled to take on America?

That my great-grandfather was one of them was passed down in family lore by word of mouth, but without proof. When I began to dig out the facts, finding Archibald McNicol listed as one of Thistle’s crew was a major moment. Apart from the blood ties, I had learned to sail at the Royal Clyde Yacht Club in the mid-1970s, in a Loch Long One Design sloop named Thistle.

“I sometimes wish, mysel’, I had taken to the yats… it’s a suit or two o’ clothes in the year, and a pleasant occupaation. Most o’ the time in canvas sluppers.”

As yachting on the Firth of Clyde and west coast of Scotland gained popularity apace through the Victorian years – the almost unique result of Glasgow’s immense industrial power and wealth generation happening within a short train ride from an aquatic paradise – so too did the industry surrounding it. The labour-intensive yachts of those days required big crews; racing yachts even bigger.

These yacht hands were mainly drawn from the coastal fishing communities; men used to handling sail powered boats and a bit of dusty weather. The large families of the time meant that some sons could be available even during the summer fishing and sailing season. They took up positions on yachts in numbers. 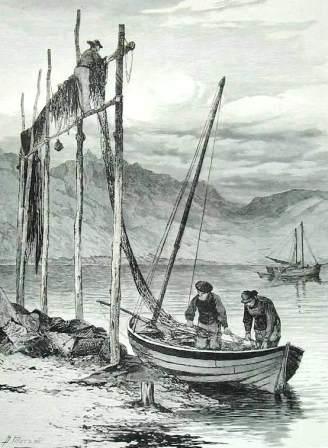 Perhaps Archibald McNicol’s family was typical. We might now refer to them as maritime crofters. The McNicol croft lay at St Catherines, opposite Inverary, on the east shore of Loch Fyne; one of two fjord-like stretches of deep, easily navigable and sheltered water that reach north from the Firth of Clyde’s interface with the lowlands, long into the mountainous highlands of Argyll. They were fish catchers and smokers, and self-sufficient, with enough land to feed themselves from what they grew there, and the loch full of herring.

It’s a beautiful location that has barely changed (if you forget about the main road driven through the middle of the croft in the 1950s). A little part remains in my family, its beach the playground and daydreaming place of childhood holidays for three McAllister boys, wondering why stones were piled into strange formations and realising much later that these were the remnants of the jetties and the bases for net drying stakes employed by our forebears. It’s hard to imagine that life here was as tough as it would have been for many in the 1880s.

Being in the ‘house’ side of things (‘2nd cook’ on Thistle) – although he wouldn’t have got away without lending his muscles to sheets and halyards during a race – Archie’s career path eventually led to him becoming a steward from 1891 aboard James A. Allan’s G.L. Watson designed steam yacht, Hermione: lucrative work at a pay rate equal to the Captain’s. One of his brothers is said to have worked for Kaiser Wilhelm II aboard the German Imperial yacht Hohenzollern II.

I’m constantly amazed that my forebears worked on such iconic yachts, and that, by chance really, so have I: the brother with the middle name, McNicol.

Presently I know a little about one more of Thistle’s crew, James Shedden, a fisherman from the tiny north Ayrshire hamlet of Portencross, its picturesque harbour dominated by a 14th Century castle with Scottish royal connections. I was lucky enough to meet his son in the 1980s, the last of the Sheddens to fish from there. He told me that in James Shedden’s days the fishermen of Portencross were line fishing from spritsail rigged clinker-built skiffs – not a rig associated with the Clyde, but one they believed was easy to ‘scandalise’ in order to slow down when fishing.

Perhaps Thistle’s carpenter, John Crawford, was connected to the family of Crawfords that worked as carpenters for William Fife & Son? Maybe John Fyfe was one of the Ardmaleish Fyfes, a family of Isle of Bute boatbuilders related to the Fife’s of Fairlie; or from a branch of that family in the Ayrshire port of Ardrossan?

Who are the others? At present all we have are names. Where did they come from? Are there other genealogically interested descendants out there who were told that their great-grandfather or great uncle sailed aboard Thistle in the America’s Cup, back in the day.

Hopefully this article might start something? If you think or know that you are descended from one of the men in the crew list, we’d love to hear from you, and hope you might be able to identify him in the photo. Please “leave a comment” below.

My dream is that we all meet up for a Thistle crew descendants gathering at the Royal Marine Hotel, Hunter’s Quay, Dunoon (below), the magnificent former clubhouse of the Royal Clyde Yacht Club, designed by G.L. Watson’s architect cousin, T.L. Watson, who was also the designer of many interiors for G.L.’s larger sailing and steam yachts – but, once again, that’s another story.

[Note added 26 March 2014: this list, from a 17 August 1887 New York Times article describing Thistle’s arrival from the Atlantic at Tompkinsville, NY, the day before, shows the addition of Thistle’s trans-Atlantic Navigation Master, Captain Donald Kerr, then a veteran of more than 30 crossings.]

There are 21 names here for what should be considered her core crew, but 22 souls in the photo. Could the 22nd man be the young Charlie Barr in his first America’s Cup appearance. He did not appear on the list, but newspaper reports place him on board for the Cup races?

Her full complement for the 1887 Cup races was 32. Unfortunately at present we have no information on who the extra hands were. Or where they came from…**

[* The dates for John and Charlie Barr’s U.S. citizenship taken from Len Paterson’s excellent book. The Auld Mug – The Scots and the America’s Cup, Glasgow, Neil Wilson, 2007. Other sources give varying dates.]

[** Note 26 March 2014: The final two paragraphs above have been slightly reworked reflecting the fact that after the original post we discovered the name of one more member of Thistle’s crew, Navigation Master, Captain Donald Kerr.]

G.L. Watson designed  four America’s Cup challengers: Thistle (1887), Valkyrie II (1893), Valkyrie III (1895) and Shamrock II (1901). Martin Black’s  beautifully illustrated biography, G.L. WATSON – THE ART AND SCIENCE OF YACHT DESIGN, takes a fresh look at these challenges, using primary sources to reveal that the British challengers more often than not snatched defeat from the jaws of victory. It can be ordered online here, or from the growing list of worldwide stockists here.

A special note about the crew photo: Long Island Maritime Museum kindly allowed us to use their image in the knowledge that it would be shared via blog, Facebook, Twitter etc in order to help find the descendants. We ask that, if sharing, you please include the credit “courtesy, Long Island Maritime Museum“, and wherever possible the link to their web site: http://www.limaritime.org/. Thanks.

10 Responses to Order of the Thistle