Nothing to do with G.L. Watson. Everything to do with the River Clyde, which made him. A worthy first ever “re-blog”, and reminder of the fabulous collections and work of University of Glasgow Archive Services (GUAS).

To see the larger photo of Queen Mary at anchor at “The Tail o’ the Bank”, click or tap “View original”.

80 years ago today ship number 534, the Cunard White Star Liner built on the river Clyde by John Brown’s shipyard, was launched and given the name RMS Queen Mary. 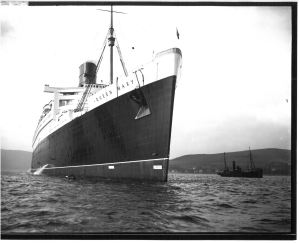 The Queen Mary was one of the most celebrated, and largest, ships of its generation and is one of the best known liners to have sailed the seas. The contract for the building of ‘ship number 534’ was signed on 1st December 1930 and the first keel plates were laid on the 27th of that month. Work halted, however, in December 1931 due to the economic depression and did not begin again until April 1934. The structure was finished within six months and she was ready for launch on 26th September 1934. 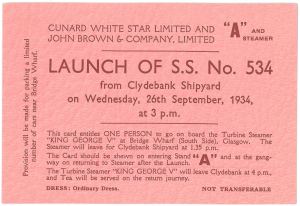